This article is from the online version of the Wall Street Journal. 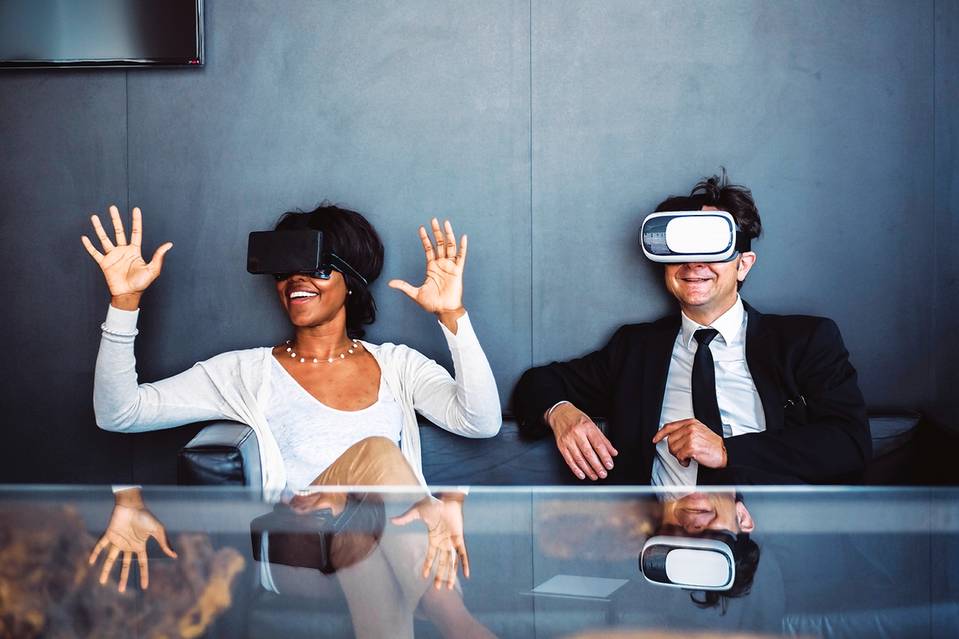 Get ready for your next conference call—in virtual reality.

With equipment for virtual-reality viewing now on the consumer market, public tech companies and venture capitalists are exploring possible applications in everything from videogames to medicine. And some are betting that virtual-reality headsets could be the next big thing in business-meeting software, upending the dreaded videoconference call.

Some of virtual reality’s potential as a meeting and collaboration tool is suggested in a video recently recorded at the NYU Media Research Lab. In the video, lab researchers strap on Samsung Gear VR headsets with antler-like sensors attached to the goggles. The headsets usher the researchers into a virtual-reality environment in which they see digital avatars of themselves moving around a simulated environment. Soon, using hand-held electronic wands, the researchers are drawing 3-D models together.

Ken Perlin, a computer-science professor at New York University and director of the research lab, has been studying collaboration in the virtual world for the past two years, attempting to understand how virtual reality might change society—including the workplace.

A global survey of attitudes toward technology in the workplace suggests he may be right. The survey, in a report from Dell Inc., Intel Corp.and consultants Penn Schoen Berland, found that 57% of employees around the world prefer face-to-face conversations with colleagues. But more than half said that better communications technology could make such interactions obsolete in the future. Millennials particularly were open to using virtual- and augmented-reality products at work, with 77% saying they would try it.

For most companies investing in the medium, virtual-reality meetings are still experimental. Employees from the Bank of Ireland and National Grid PLC, the British utility, have tweeted about their early sampling of virtual-reality meeting software. Mike Harlick, head of the Bank of Ireland Worklab, said to him it felt like “the future of collaboration.”

Mr. Harlick told The Wall Street Journal that his firm has been experimenting with several virtual conferencing centers. He said he doesn’t see virtual reality replacing video calls, but that it provides functions that other office collaboration tools do not offer. He said he thinks it will help his team be more effective in how they communicate.

“In the context of office meetings you now have a whole virtual environment where you can co-create and interact,” he wrote in an email. “So you may have white boards on one wall, a shared document on another.”

The National Grid employee who tweeted, David Goldsby, said a team he presented to was “seriously impressed” by the technology. However, he said the Wi-Fi in their hotel presented challenges. The company didn't respond to a request for comment.

Some of the earliest adopters are in videogaming and the virtual-reality industry itself. Neil Glenister, founder of a London-based gaming company called 232 Studios, says his team has typically conducted lengthy weekly group meetings on Skype. But the team, he says, is tired of videoconferencing. It doesn’t make them feel as if they are in the same room, he says, and they have trouble seeing each other’s hand gestures.

At times, he says, they struggled to focus on work-related topics because they were distracted by the planets surrounding them.

Still, he says, “that sense of presence was really good. The dynamics of the calls through Skype weren’t as friendly.”

Skype, which is owned by Microsoft Corp., didn’t say if it has developed a virtual-reality application, but a spokesman says the company is testing the waters in augmented reality, a close cousin of virtual reality in which a viewer sees digital images imposed over real-world environments. Skype says it has developed an application for the HoloLens, Microsoft’s augmented-reality device that is currently only available to developers.

Something else that virtual reality provides that video calls typically don’t: eye contact. Though they’re looking through their avatars’ eyes, participants in a virtual-reality meeting get the feeling they are making eye contact, says Eric Romo, chief executive of AltspaceVR Inc., a Redwood City, Calif., company that designs environments for virtual-reality meetings using avatars. Some virtual-reality companies are experimenting with eye-tracking technology that would allow the goggles to better track users’ eye movements and convey even more realistic eye contact.

In a typical video call, by contrast, a participant may think he or she is making eye contact, but to the other person they appear to be looking down. Instead of looking directly at each other’s image, you have to look into the camera for the other person to get the feeling you are looking into their eyes.

Other kinds of physical cues missing from most telecommunication may be incorporated into virtual-reality calls as well. While arms are frequently out of sight in video chats when people are sitting close to the camera, some virtual-reality headsets are able to capture arm and hand gestures that are then imitated by an avatar. Participants can get visual insights into group dynamics, as well, such as how close certain avatars stand to one another.

“There are all these nonverbal cues we have physically that we don’t have in [most] communication technologies except for VR,” Mr. Romo says.

One of the biggest challenges today for companies creating meeting spaces in virtual reality is to make avatars that realistically capture and instantly reflect the users’ emotions. Some companies are putting transitional technologies, like emojis, into their virtual environments. But companies are experimenting with technologies that would allow avatars to capture facial expressions.

Another hurdle that technologists are addressing is capturing fine movements. With hand controllers, avatars can imitate simple gestures, like waving a hand. Researchers and businesses are pushing to capture finger movements.

Other impediments remain as well. Even if a person or a business invests in the equipment needed to hold a virtual-reality meeting, the equipment is still relatively rare. Others have to invest as well for meetings to be possible. Early headsets that use mobile phones also have very limited battery life, connectivity issues and can overheat.

Prof. Perlin, meanwhile, says the impact of virtual-reality meetings will be similar to other communication technologies that have come before.

“I think it’s important also to keep in mind when you look at historical trends, the more we’ve embraced new kinds of telecommunication media, things like Skype, the more we’ve traveled,” he says. “The more we feel connected to people, the more we want to physically be together.”

Ms. Zakrzewski is a reporter in The Wall Street Journal’s San Francisco bureau. She can be reached at This email address is being protected from spambots. You need JavaScript enabled to view it..